Simple habits are all about “Keeping it Simple” 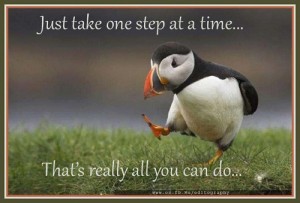 Everything I know and have read about changing a habit, learning a new skill, or achieving a goal teaches that it is all about keeping it simple. Break it down into manageable parts. Keep your simple habits simple to implement. Personally, I have found this to be easier said than done!

I sometimes find it amusing that the habit that I need to work the hardest to incorporate is simply looking at the big picture and then breaking it down. Simplify!

Whether it is a new, “simple” fitness habit, an exercise and how to coach it, creating new programs, or planning out what generally needs to get done in my life, I have tendency to get stuck on the “holy crap that is a lot of stuff!” step. Then ignoring it and doing something that still is on the list which – normally – has nothing to do with what I set out to do. This is how things wind up getting put off until the very last minute.

Recently, one of my bootcamp friends told me a great story about how, at one point, she was faced with climbing what seemed like an insurmountable mountain. Standing at the bottom of it, something she had never thought would ever be in her future, yet here it was. In the present.

The people she was with kept coaching her through on the technical steps of what needed to be done at that moment. Together they hiked one step at a time, up the slopes and to the top. She felt the mountain looming, but was so focused on taking the next step she forgot how steep the path up the mountain was. And then, suddenly, she found her self at the top of the hill realizing how, by never giving up and with all her focus on the next step, even this seemingly insurmountable path up the mountain had been conquered.

I often think of that story and use it as inspiration to break my life tasks down into simple steps that I can manage and not be rendered immobile by self-defeating emotions.

Bootcamp is kept simple because the basic functional movements we use in our lives are the backbone to some of the most effective training exercises that are used today. Another bootcamp friend told me that he liked the fact that he knew the majority of exercises that we incorporated into the weekly classes but that they were never in the same order or in the same routine. He looked forward to the new routine and still felt confident in the movements. He liked the simplicity.

Keeping it simple also leads to less stress. That is something else I am working on!

We use cookies to ensure that we give you the best experience on our website. If you continue to use this site we will assume that you do not object.I acceptI do not accept
Revoke cookies